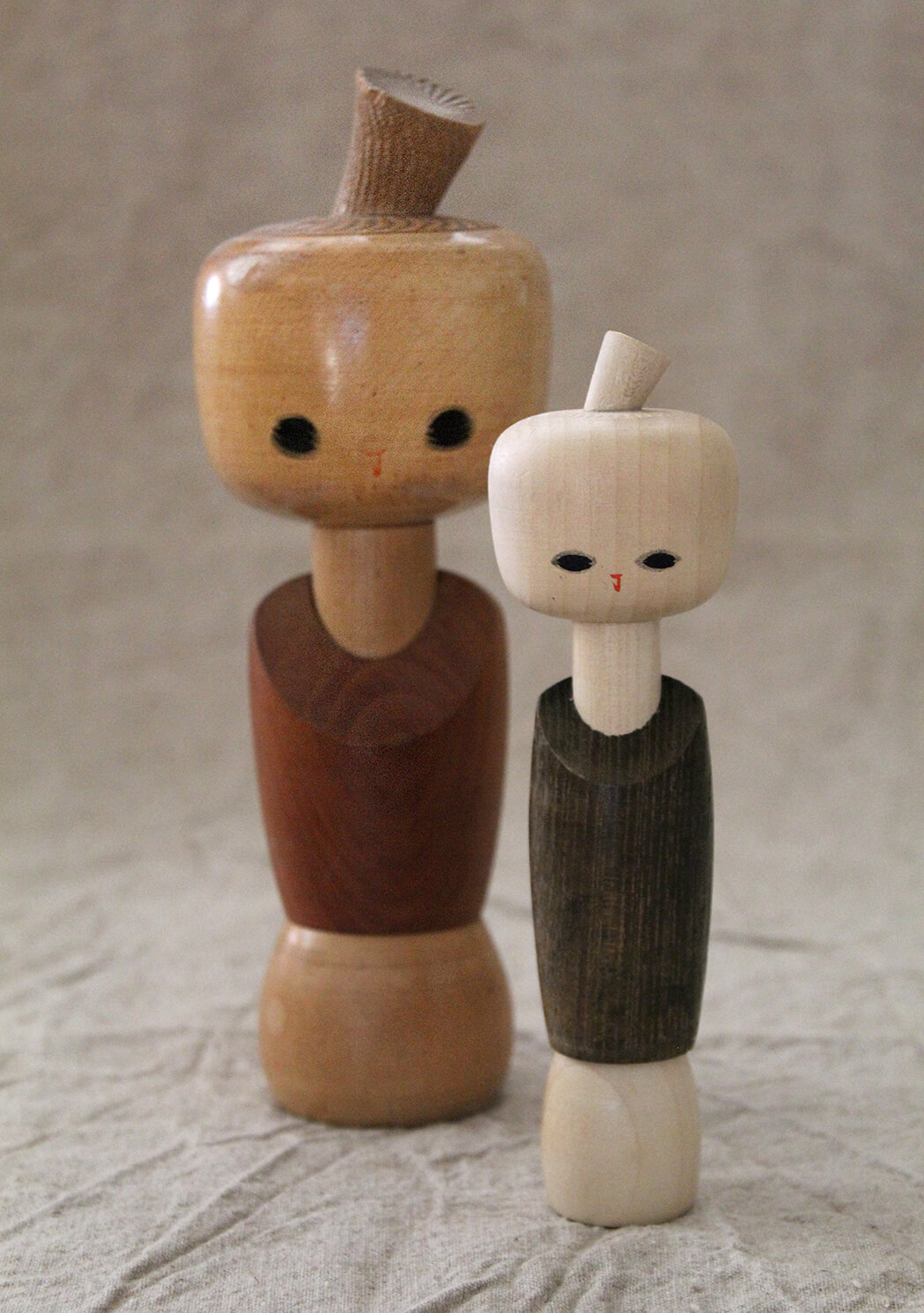 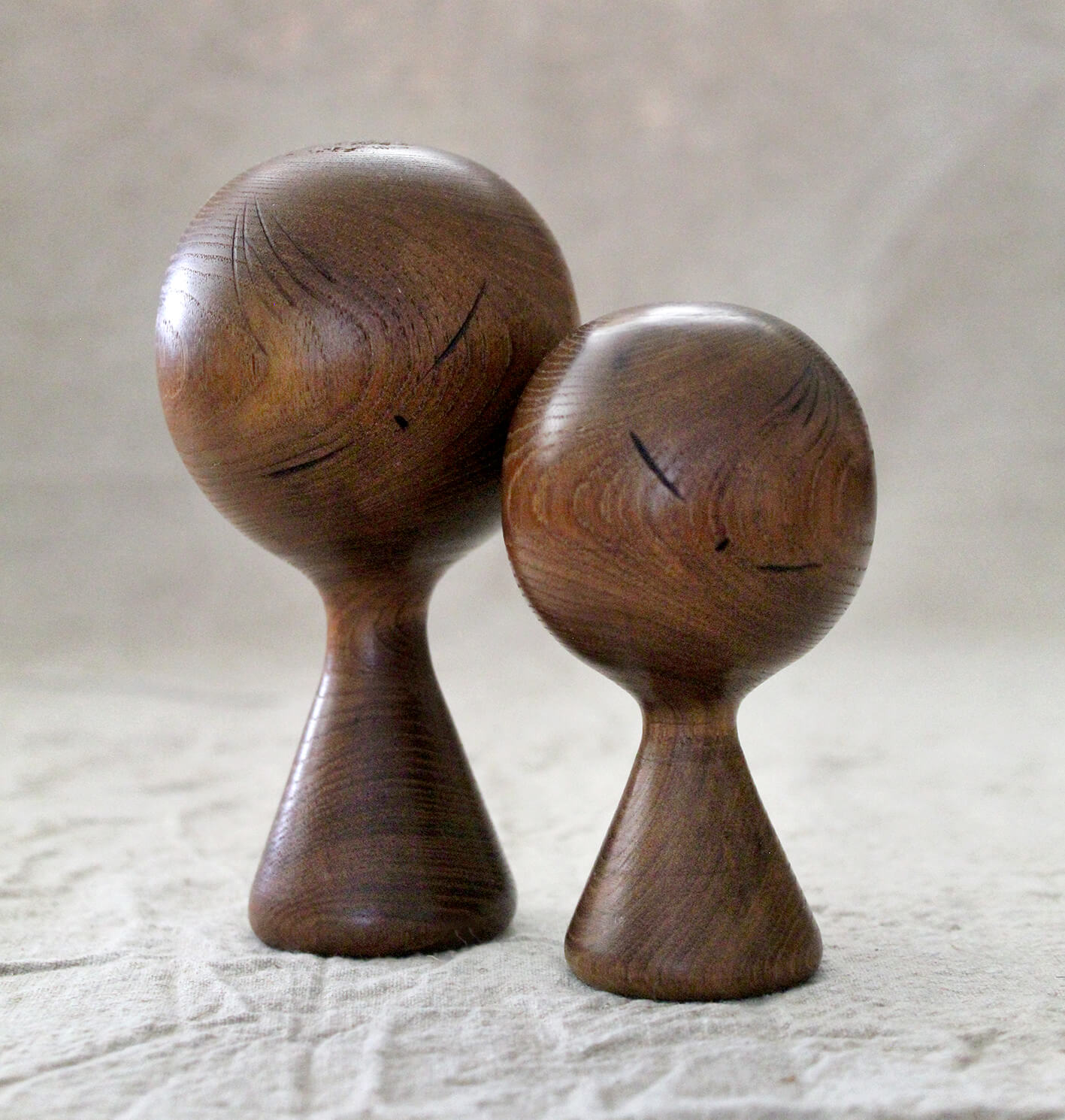 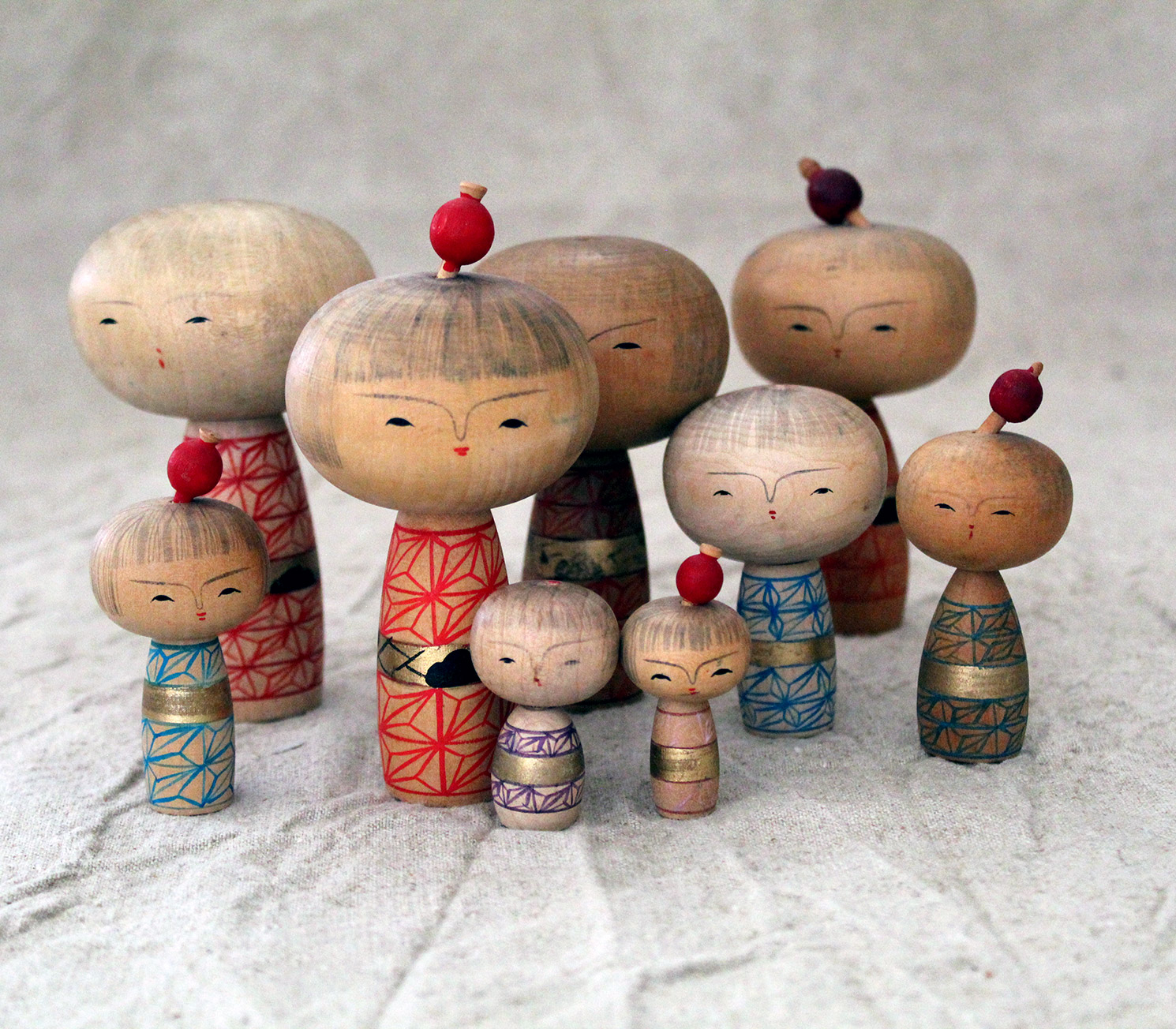 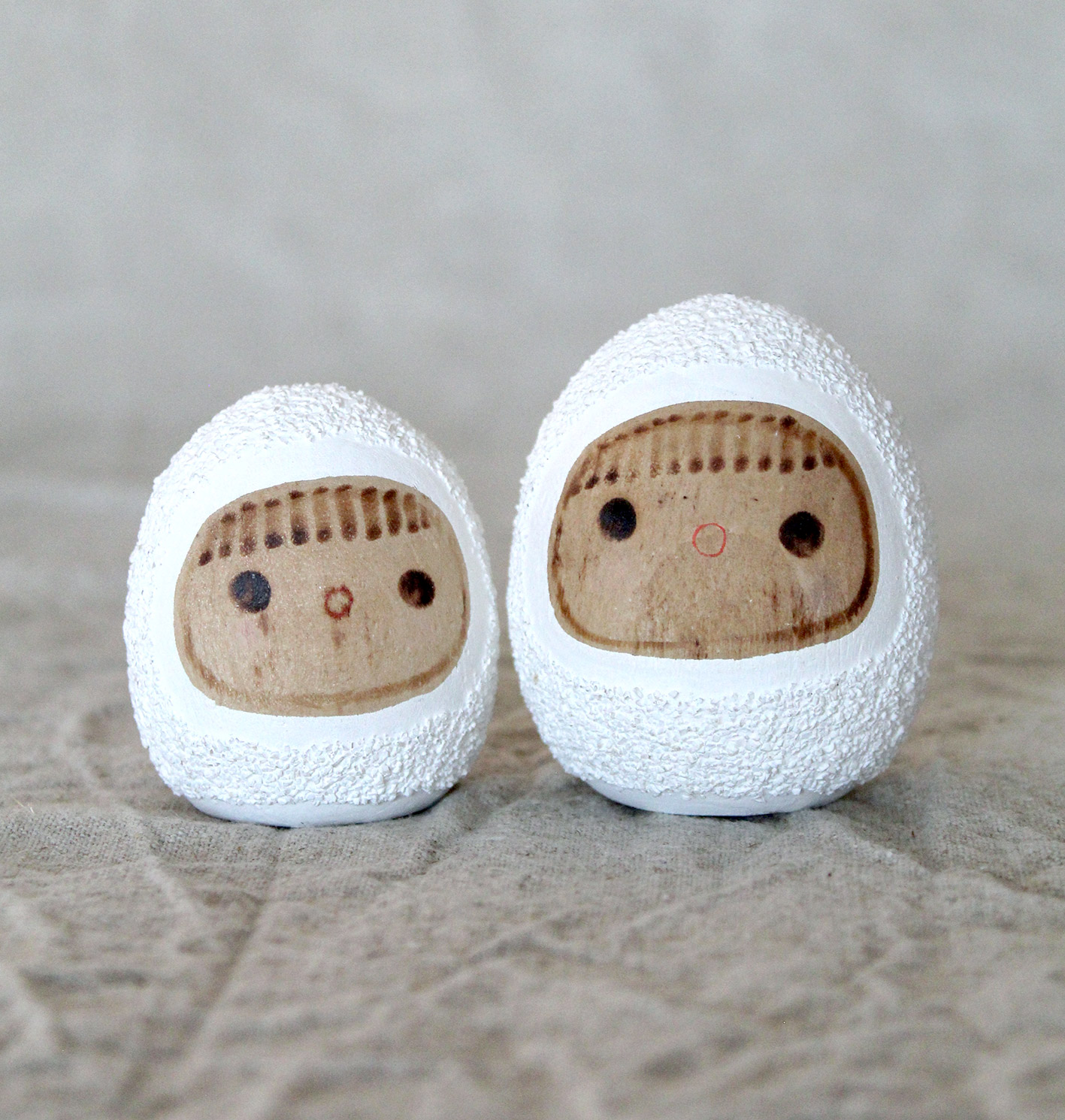 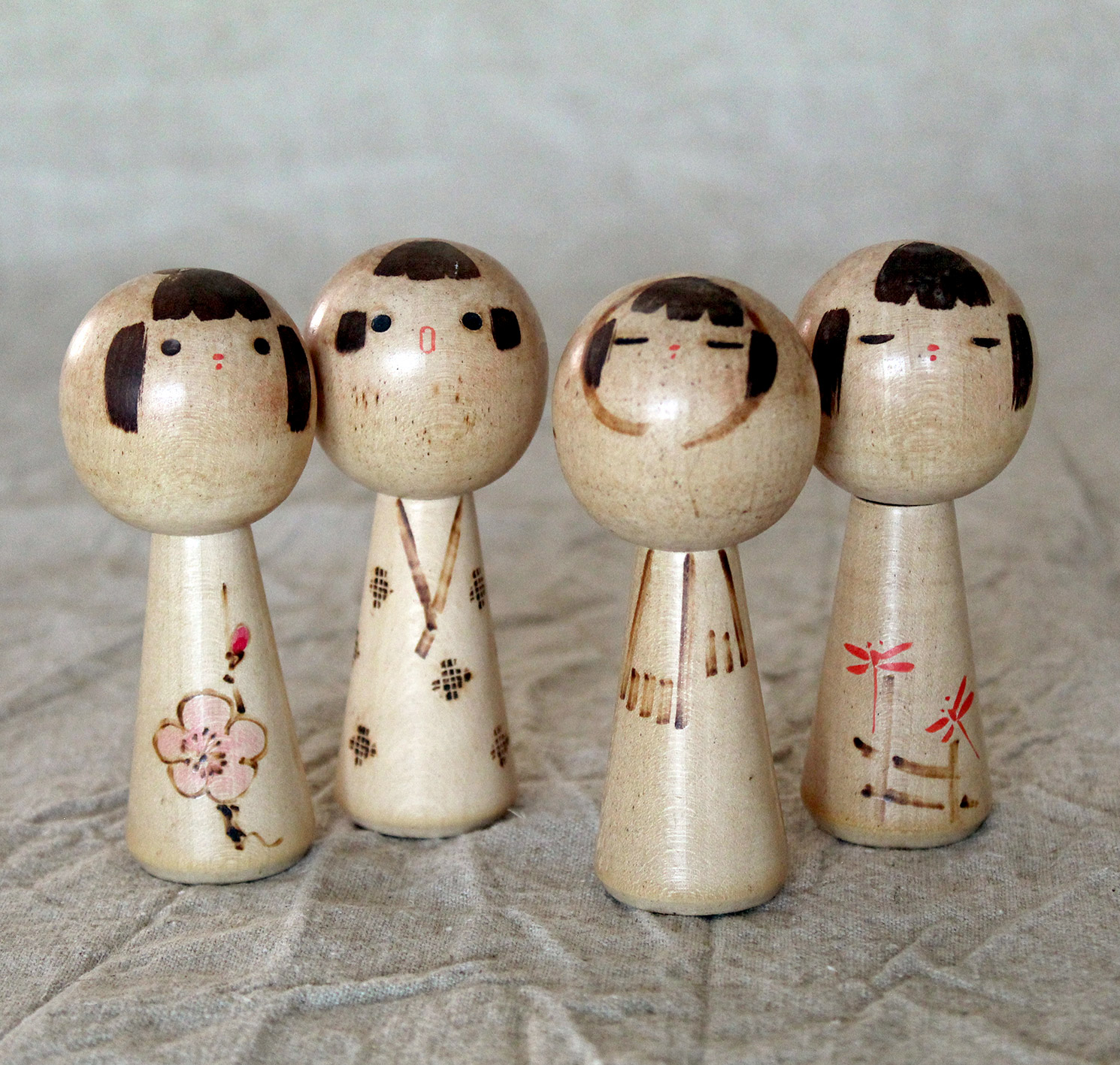 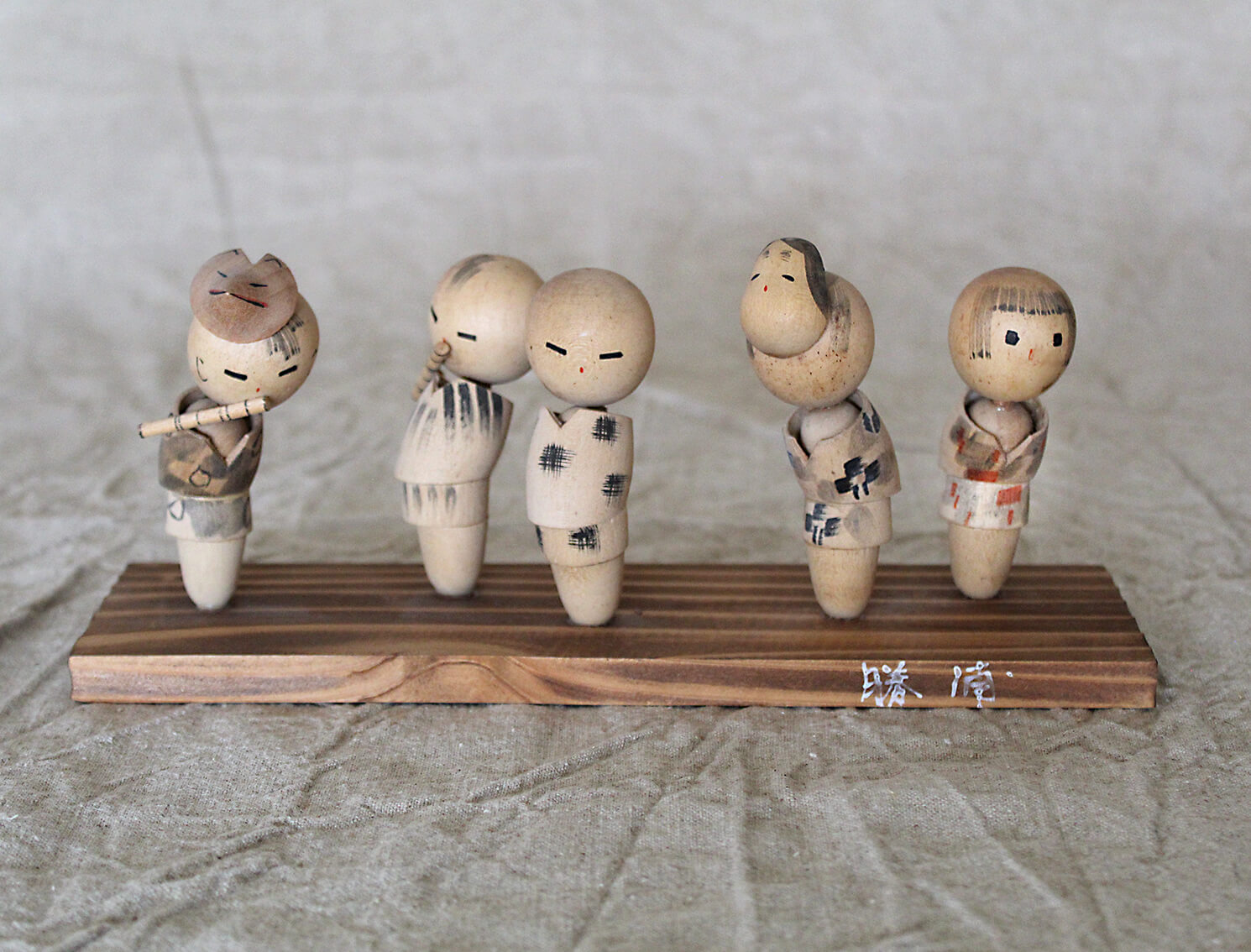 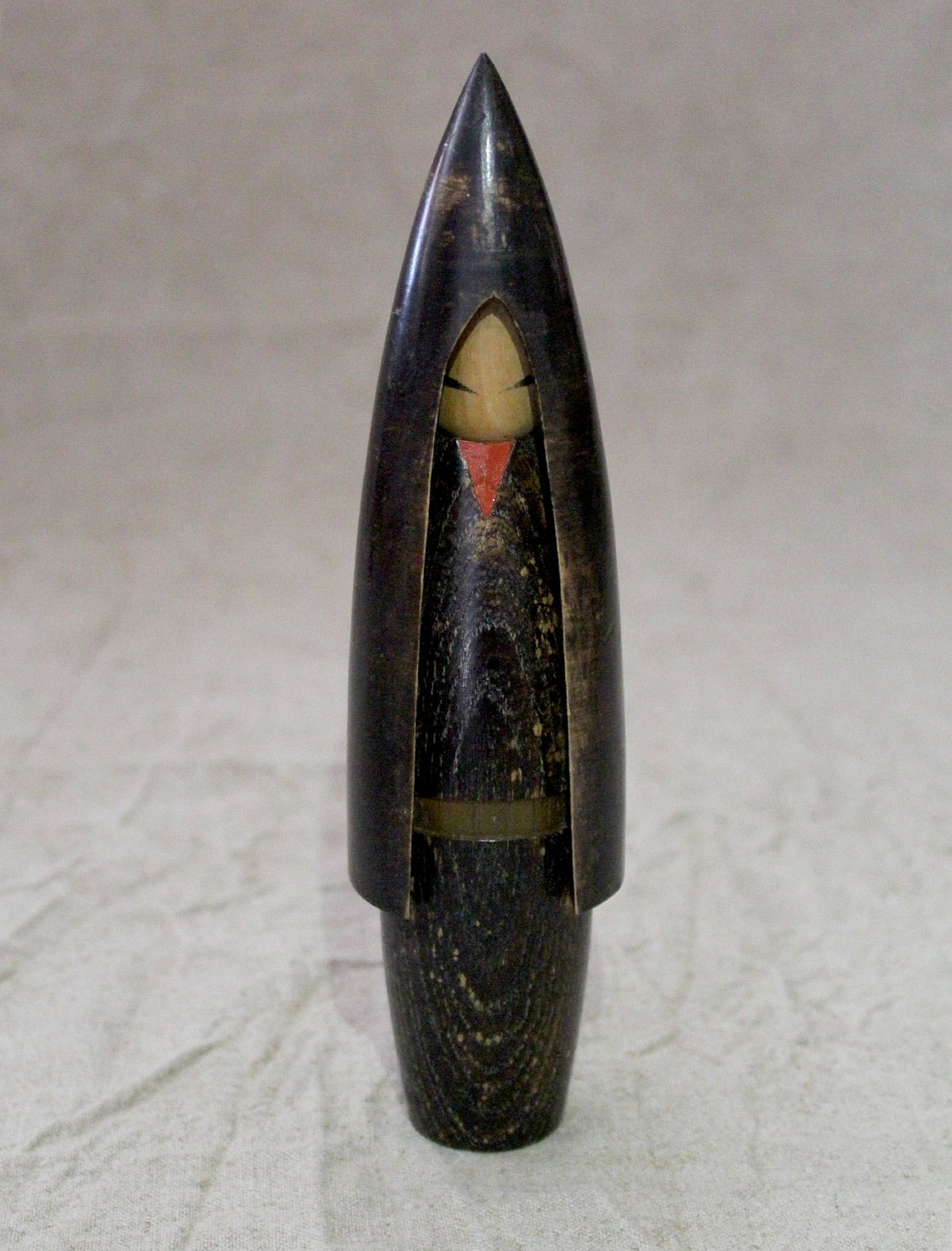 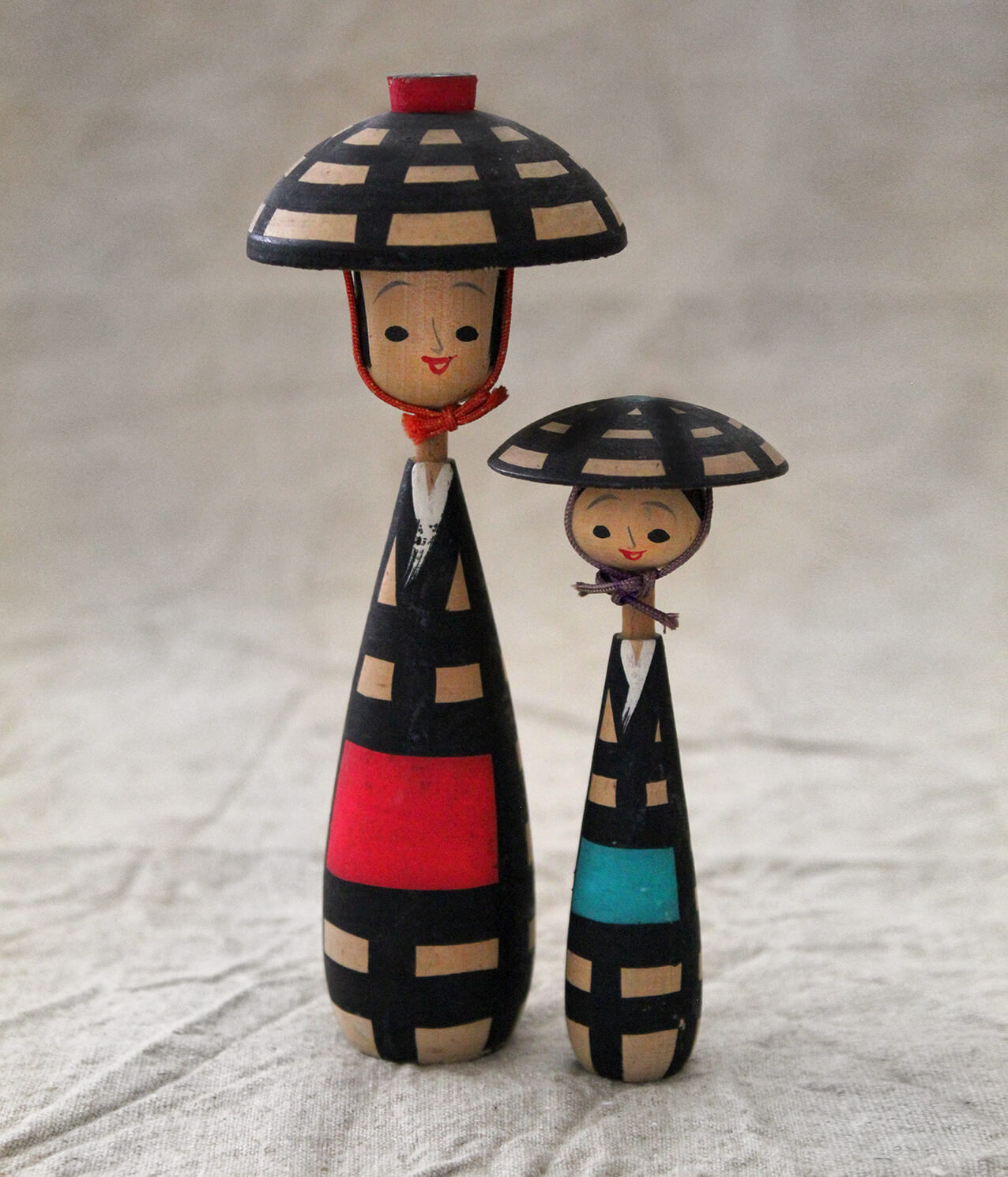 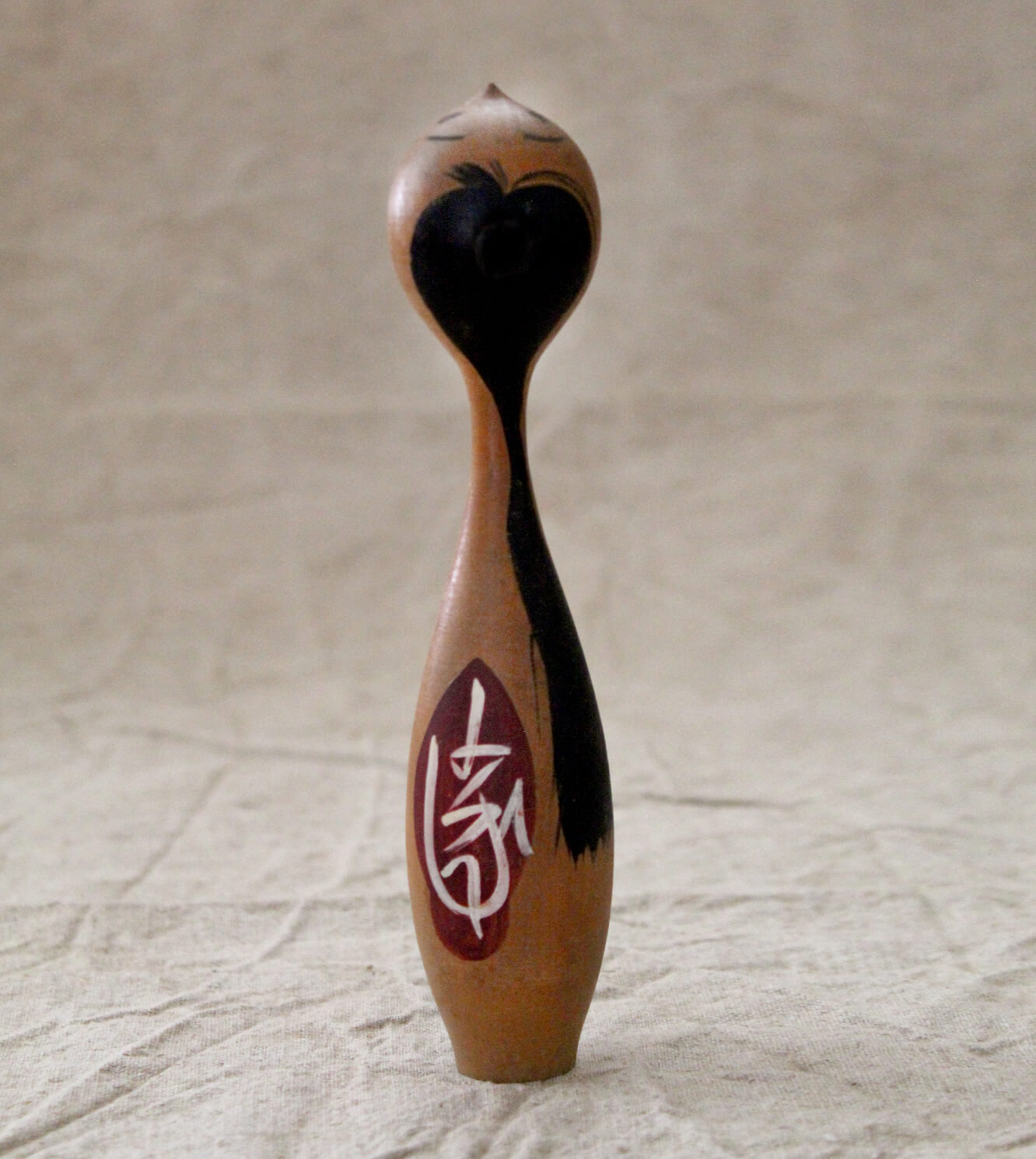 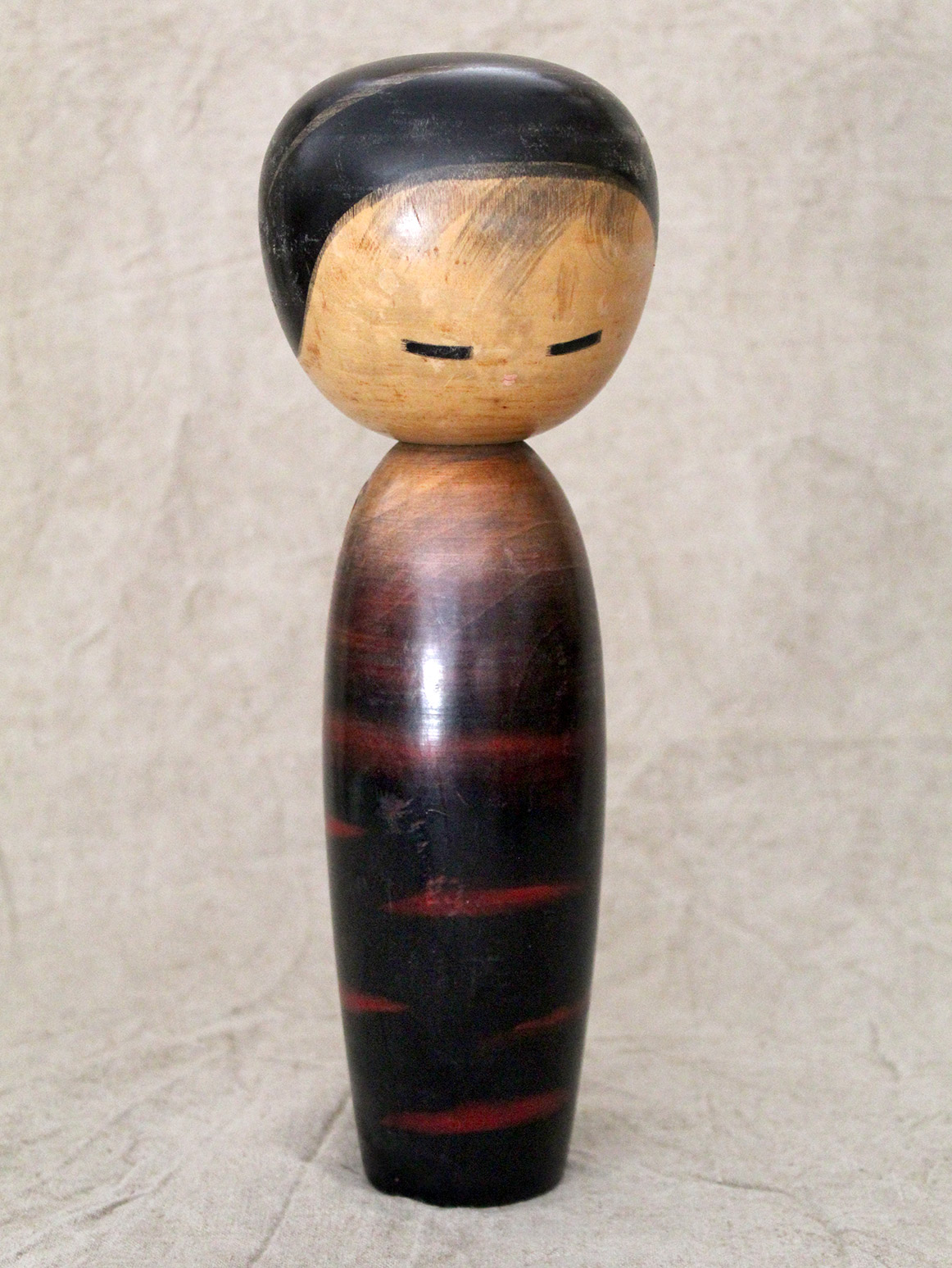 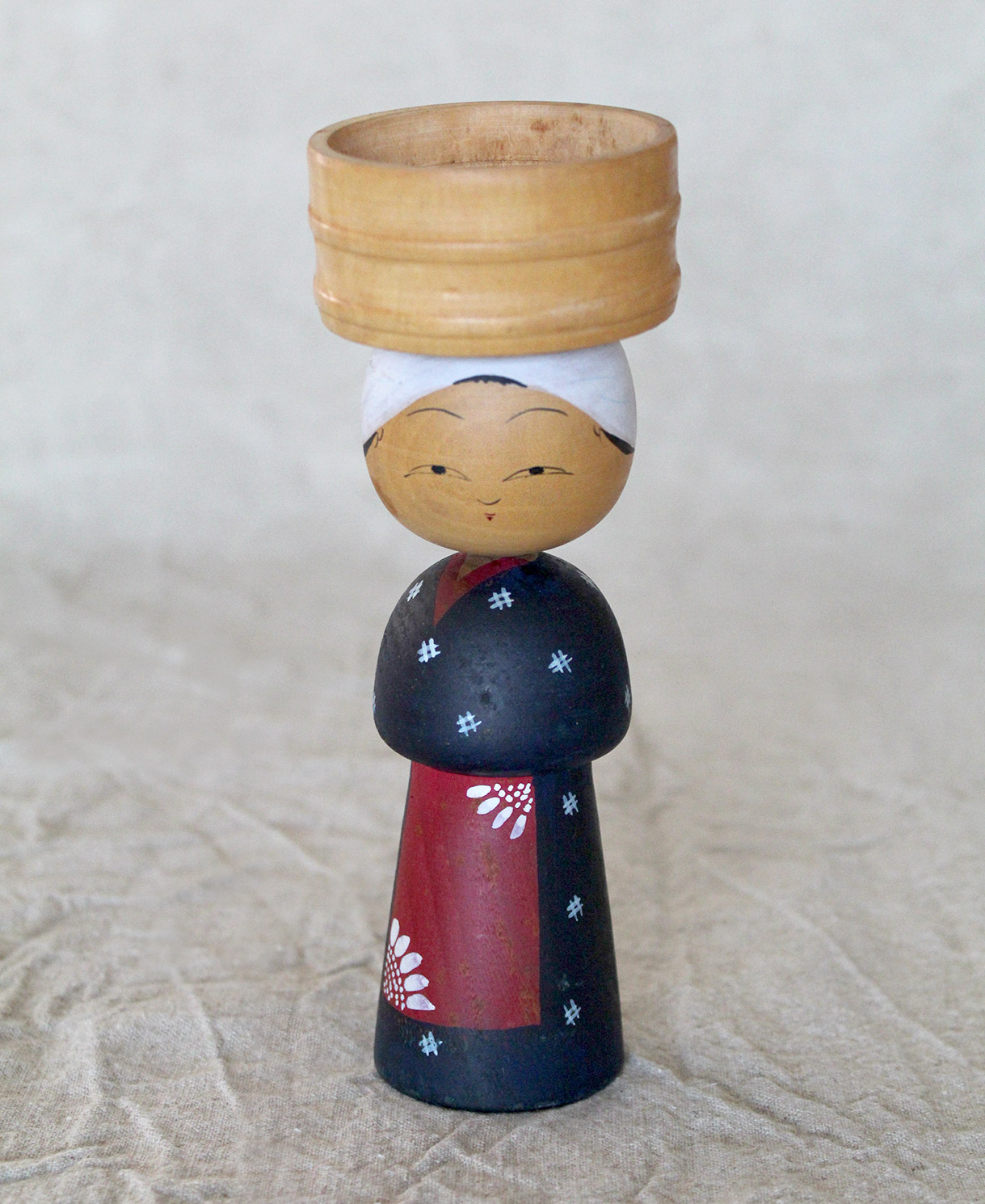 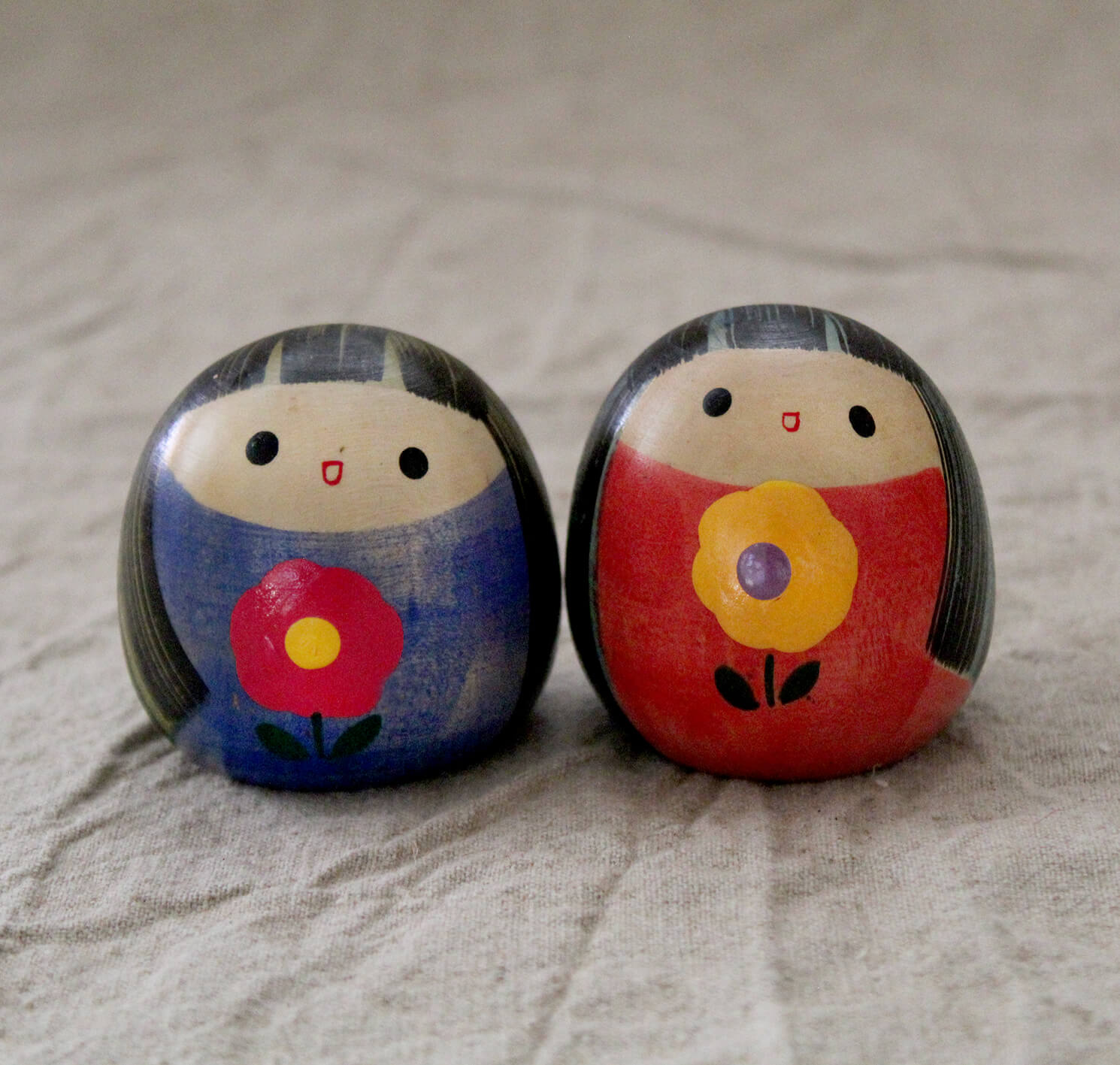 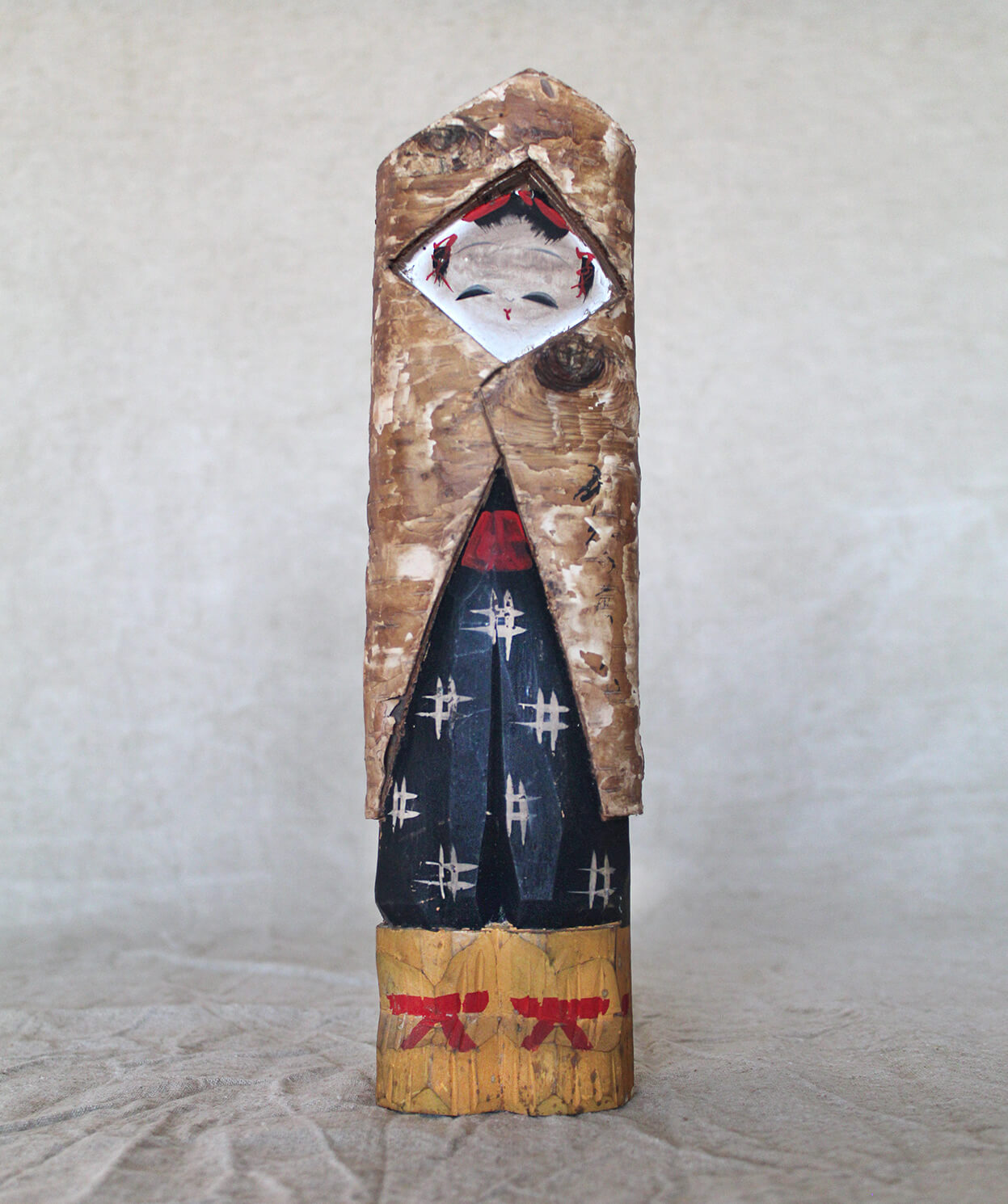 Kokeshi A Japanese simple handmade wooden doll with no arms or legs. Historically believed to have been first produced during the late edo period (1804-1811) as a toy for children. Originally from the northeastern region Tōhoku, the kokeshi was made as a souvenir for travelers visiting the onsen.
There are two types of Kokeshi, one is Traditional Kokeshi which originates in the 1800s, dolls’ shapes and patterns are particular to a certain area and are classified under eleven types. Another type is the Creative Kokeshi which allows the artist complete freedom in terms of shape, design and color and were developed after world war II. They are not particular to a specific region of Japan and generally Creative Kokeshi artists are found in cities. Kokeshi are now considered traditional artwork and are the most popular Japanese folk craft.

Creative/Modern Kokeshi (Sôsaku) Kokeshi found in this category are free form works. The artist has full autonomy to create their pieces in any style they chose. It is the unrestrained imagination of the individual artist that creates these small works of art. Their popularity has grown as people recognize their artistry. Using unique techniques in making the dolls, such as engraving and baking. The result of these innovative techniques creates an artistic and beautiful doll. Kokeshi in this category vary immensely as they are open to the ideas, interpretations and perceptions of the artist.

The beauty of the Creative Kokeshi is in the craftsmanship and theme that the artist wishes to express in each doll they create. Since 1954, the prime minister prize has been awarded each year to the best work of Creative Kokeshi. There are many different styles of Kokeshi, but there is one philosophy that all Kokeshi dolls share and that is the pursuit of beauty and artistry through simplicity.

My Sôsaku Collection I began collecting Kokeshi a few years ago, rather by chance. I’ve always been attracted to old popular toys, as well as to Japanese art, and since I myself carve wood, I have a soft spot for wood objects.
In the beginning I came across commercial, contemporary Kokeshi (the popular, made-in-China industrial type…), and yet there was something about the simple, attractive figure that captured my heart. When a friend flew to Japan, I asked for Kokeshi as a gift.
Since then I have become a devoted admirer. I began reading about it and became acquainted with styles, eras, and artists.
My greatest passion is for the “Creative Kokeshi” style, which took form in the late 1950s. My collection consists mostly of Kokeshi made beginning after World War II and up to the end of the twentieth century.
I have in my collection pieces of museum-quality, made by renowned artists, as well as simple Kokeshi, made by anonymous artists, that captured my heart with their simple, naïve beauty, or else with their sophisticated elegance. But most of all I appreciate the Kokeshi’s originality, the artists’ personal expression and the ability to convey so much with so little.